A Discovery in India

Completing genealogy research in India leads to surprising discovery for one of our clients. Shared with permission.

Though genealogists and those interested in genealogy reside around the globe, much of the genealogical world today is Eurocentric. This means that research, resources, and the collections of major websites are heavily devoted to records of European countries and those settled by Europeans (including large portions of both North and South America). There are several reasons for this – two of which include a) the interest in genealogy and demand for resources has, until fairly recently, been largely held by those of European heritage, and b) Western civil and ecclesiastical practices regarding record keeping and accessibility are more familiar to the majority of those with interest. (Certainly there are other reasons, and these two have been simplified.)

But with the advent of new technology, globalization, and widespread internet access, genealogy has become of greater interest to millions worldwide on other continents and of other ethnic backgrounds. In the past year, for example, Legacy Tree has been hired to conduct research for people of Chinese, Egyptian, Turkish, Greek, South African, and Syrian heritage – many of which largely require the aid of onsite agents in those countries. (In the past year we’ve also completed projects in less common European countries, such as Armenia, Finland, Belarus, and Slovenia.)

Sometimes, what starts out as a fairly straightforward project for us turns up unexpected results. In one case, digging into a client’s colonial British heritage in India revealed that one of her several-times-great-grandmothers, born in the early 1800s, was actually native Indian.

England held jurisdiction over the Indian subcontinent to varying degrees and for various purposes for over four hundred years, from 1612 to the late 1940s. As a result, many white British citizens were sent or went there of their own volition in that span. Some went permanently and some only temporarily for specific purposes, ranging from mandatory military service to missionary activity, business ventures, or trade. And while many men brought their families or left wives and children back home in England, there were some who intermarried with the local people and stayed in India for generations.

As we were to learn, such was the case with Samuel Hettley and his second wife. A 23-year-old widower in 1842, we discovered a marriage record in Tripassore, Madras Presidency between Samuel and a woman named Susanna. The document contained no surname for this young woman, and listed in its place the designation “Native Christian” – a phrase then used to denote an Indian who had been baptized. The client had had no idea that her ancestry – previously assumed to be thoroughly Anglo – also included Asian branches. True, her family connection to India is long, as she has ancestors who arrived as early as 1840 and have consistently remained there well into the 1960s, but the knowledge that she was partially Indian herself was new. 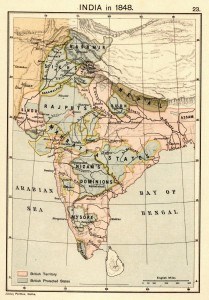 This project is ongoing, and it remains to be seen how much more we will be able to find for her in India. Particularly in pre-20th century history, Indian records are currently scattered and incomplete. We have relied heavily so far on British civil and ecclesiastical records there and anticipate continuing to do so, with the addition of military collections, passenger lists, and an infusion of local history. With a combination of sources onsite in India, as well as records available in Utah at the world’s largest family history library, and collections online, the possibilities for additional discovery are exciting!

Can Legacy Tree Genealogists help you uncover your roots?  In addition to a core staff of excellent Utah-based researchers, we have agents onsite in many countries worldwide. Contact us today for a free consultation!