Legacy Tree Genealogists works with researchers from across the globe to access records for our clients. We asked Christopher, onsite in England, to share his experiences researching at the Canterbury Cathedral Archives in England. 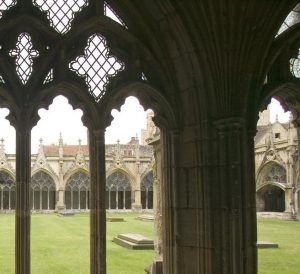 The approach to the Cathedral Archives is extraordinary – the cloisters, heraldic symbols in the ceiling, the stone floors. Just past the cloister is a vast wooden door, and next to it is the small sign “Archives and Library”. On entering this space, you climb the stone staircase, go through the double doors, and enter the public search room.

It’s an airy and peaceful space, with as many academics researching medieval documents as there are genealogists tracing family histories. Conversation is usually whispered. Pens are forbidden. “Selfie” photography is not allowed. 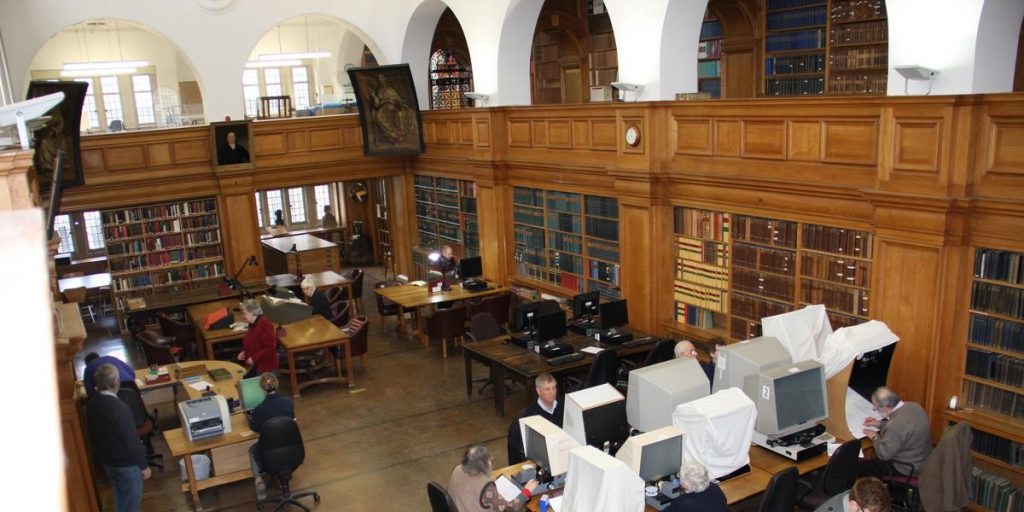 The record collections at the Canterbury Cathedral Archives extend back to the ninth century. Genealogical records including the Canterbury probate records, officially cover from 1396 to 1858 and are among the earliest major family history sources there. The Canterbury Probate Records Database is really useful and detailed. The archives also house a large quantity of wills, and the records increase greatly from the early 1500’s. These were wills proved in the Archdeaconry and Consistory Courts of Canterbury, essentially here in East Kent. These records continued up until 1858 when probate jurisdiction passed to the state.  It is important to remember that there was a hiatus during the Commonwealth and Civil war period, from 1642 to 1660.  Many of us with perhaps quite humble ancestors tend to ignore wills, but with primogeniture, in operation, one only needed to be the youngest son of the youngest son to go from lord of the manor to simple ploughboy.

In fact, probate matters in Kent were more complicated and the most unique in the entire country, for their system known as ‘Gavelkind’ operated throughout the medieval period. It came from the Anglo-Saxon meaning “holding of a family”, whereby an estate could be divided equally among all sons, and occasionally daughters. Some historians would argue that this largely related to intestacy. It could prove impractical, as lands became ever smaller. By Tudor times Kentish wills appear similar to those of other dioceses.

When carrying out genealogy research, especially in an unfamiliar area, maps, like the Institute of Heraldic and Genealogical Studies series of parish maps, are most helpful. They show the dates on which parish registers began and their respective probate jurisdictions.  They are often the means of avoiding easy, but potentially disastrous mistakes. In East Kent, for example, there are two parishes called Goodnestone, just 15 miles apart. With a common surname, it would be all too easy to follow the wrong family line.  Below is a section of the parish map of Kent, focusing on the diocese of Canterbury. 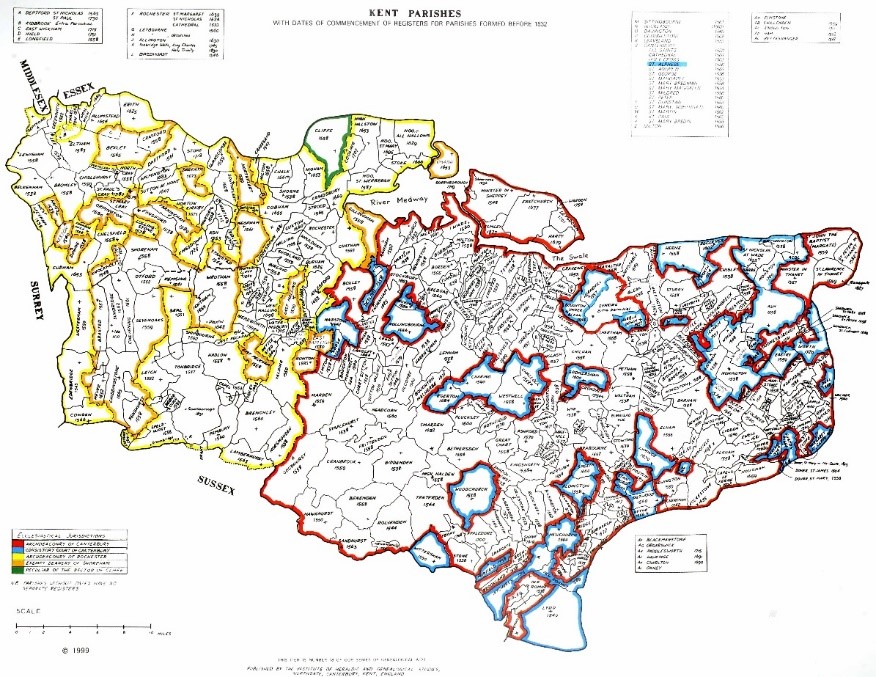 The parish register collection is on microfilm these days, boxed in easy alphabetical order. It is always worth remembering with English registers that pre-printed volumes, which the vicar or rector then filled out, were introduced only in 1754 for marriages and as late as 1813 for baptisms and burials. Because these were filled out by the vicar or rector there was standardized content.

Extra details such as occupations, the person’s age at burial, marital status, and the witnesses’ names can make a world of difference in your research. And a signature in a register can even distinguish the relevant individual out of two John Smiths!

The History Behind the Records

Prior to the vicar and rector taking over writing the records, the record keeping was in the hands of the local incumbent. They were not above making comments about their congregation, as with the marked example shown here. A marriage of 6th June 1744 in the tiny coastal parish of Seasalter referred to ‘John Housden, a gape-mouthed lazy fellow and Hannah Matthews….an old toothless wriggling hagg’. More helpful was the second marriage entry on this page, where a couple from nearby Whitstable were also marrying at Seasalter. Their occupations of dredgerman and hog woman were clearly indicated. It might be argued that far-flung, sparsely populated parishes with poor livings were much more difficult to fill with clergy and it is often in such places that one encounters the more eccentric clergymen, which can prove surprisingly helpful.

Of special importance with regard to parish registers at Canterbury is the comprehensive collection of Bishops Transcripts or “BTs”.  The original registers of many dioceses have been digitized, but these Bishops and Archdeacons Transcripts can fill in gaps.  The incumbent of each parish would often keep rough notes on pieces of parchment or paper, and later copy them into his own register, together with one for his bishop- or archbishop here. Sometimes the originals at the church were destroyed by fire, flood or other accident, and the BTs copy offers the answers. A vicar might draw up the copy for his superiors more neatly, and of course, this can assist where problems of deciphering the handwriting occur. Most BTs began during the reign of Elizabeth I. Actual legislation was introduced in 1598, but clergymen usually backdated their register copies to Elizabeth’s accession in 1558. This can prove extremely useful and is an important Canterbury Cathedral Archives resource.

There is a vast range of other records. Their holdings include tithe and other maps, court rolls, visitations, together with other essential details of parish life. A direct approach is just to go to the online catalog and type in a parish name. The example here is of a map relating to the parish of Saltwood, near Hythe. Such documents frequently turn out to be both useful and beautiful. 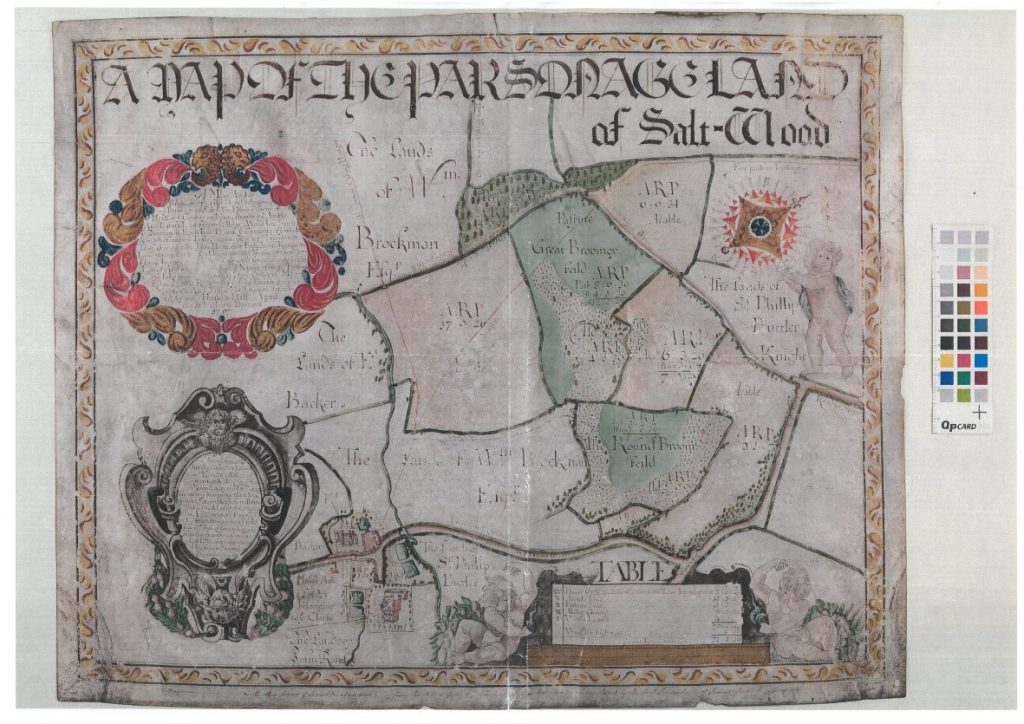 The catalog will show for example where lists of Freemen exist, going back as far as 1327.  There is a vast amount of material relating to property, such as leases, conveyances, mortgages, and bonds, extending from as early as the 1400’s to the early twentieth century.

Records of justice feature in the ecclesiastical courts from the 1400s too, extending later than one might expect, with justice eventually being seen as a matter of state rather than church. Into Victorian times, conviction notices abound, such as in 1874 when one William Fox of St. Mary Bredin was cited for stealing a sheepskin coat, value 8 shillings, from a cart, followed by the names of witnesses. Interesting records can be found throughout the centuries of record collections, even unto recent times: like the lists of charabanc (carriage) owners all over the county, from 1921 to 1925.  Or the records of Canterbury City Council from the 12th century, the vast Howley-Harrison collection, including abolitionist material, as well as the Gentleman’s Magazine and numerous other pamphlets and journals. 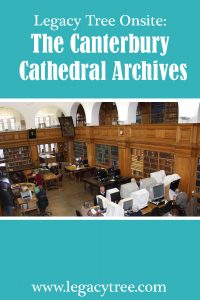 Once you have pinpointed the catalog references that interest you, you can then order the documents using the appropriate reference numbers. Naturally, the catalog itself is a synopsis and there may be more fascinating details to find. Always try to order documents two or three days in advance of your visit.

Numbers of film/fiche readers, computers and desk spaces for original documents are limited, and so it is essential to make contact in advance, at archive@canterbury-cathedral.org.  In particular, public access is only on certain days -Tuesdays to Thursdays, and the first Saturday of the month, which is, quite a good time to go since they generally have a local expert from the Kent Family History Society there specifically to advise. But take note, Saturday opening is mornings only. Longer periods of closure are scheduled later in the year- 20th to 31st August, and 5th to 9th November.

Like most archives, you need to turn up with plenty of I.D., and a passport-sized photograph will give you a CARN reader’s ticket which can be used in most repositories nationwide.  Microfilm and fiche records can be easily copied in the search room, and for more complicated tasks there is an efficient reprographic service. In addition, a permit to photograph records can be obtained for £6 sterling per day. The permit includes a copyright agreement/restriction.

Hardened, well-traveled genealogists will be used to brand new, shiny “heritage hubs” and the like. But for atmosphere, for actually being part of the history we are all researching, the Canterbury Cathedral Archives represents a wonderful environment and a first-rate collection.