Legacy Tree Genealogists works with researchers from across the globe to access records for our clients. We asked one of our onsite researchers to share tips for family history research in England. 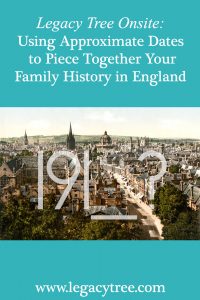 Records are cataloged by time, place and dates, and even if approximate, dates are necessary to begin research. In this article we share a case study to illustrate how to calculate approximate dates to begin family history research in England.

In this illustration, we began with the dates from the information inscribed on a family grave for the Davies family. Gravestones hold a wealth of information and if you do not live near the graveyard, look online is www.findagrave.com. The information recorded on Samuel Davies’ gravestone provided the death date of 23 June 1965 at age 80. Samuel’s wife, Minnie Davies gravestone provided that she died 26 July 1972, at the age of 86. Also, listed on the grave marker was two of their children Edith Davies who died 1 January 1991 and Harold Davies who died 5 April 1982, at 68 years. The only other information was the location of the grave: Saddleworth (highlighted to show the importance of place names in carrying out research).

Every bit of information is important in genealogical research as it’s like piecing a jigsaw together and you need every piece of the puzzle. To get started, you must first determine an approximate year of birth for each ancestor: taking the year of death and how old the ancestor was when they died and working back would give an estimated year of birth. Harold Davies would have been born around 1914 and Edith Davies would have been born around 1918. These approximations are important to finding record collections that apply to the Davies family.

Once you have approximated dates and ages for the family members you can now determine record collections to search. Every 10 years since 1801 in England a population census has been taken which gives information such as names of people in a household, address, occupations, where they were born and how old they were on the day of the census. The census is published 100 years after it was taken so we currently have access to the 1801 census up to the 1911 census. This information can be crucial in genealogical research and is usually an ideal place to start. Familysearch.org is a free web-site that holds census information for England, as well as findmypast.com; however in this instance the dates of birth for both Harold and Edith were after 1911 and therefore wouldn’t be found on a census.

To try and find Harold and Edith’s birthdates I went to the free website www.freebmd.org.uk. This site is a project which aims to transcribe all the Civil registration records including births, marriages and deaths from 1837-1983. The first search was for Harold Davies’ birth between 1912 and 1914 which brought up zero results. After 1911 the index includes the mother’s maiden name and is a great way of cross-referencing information to verify facts. At this point I was assuming that Harold was born in Saddleworth, unfortunately, there were no Harold Davies’ registered births in Saddleworth. There were 129 Harold Davies’ born in England and Wales (Davies is a popular surname!) Next, I turned to Edith Davies and searched for her. 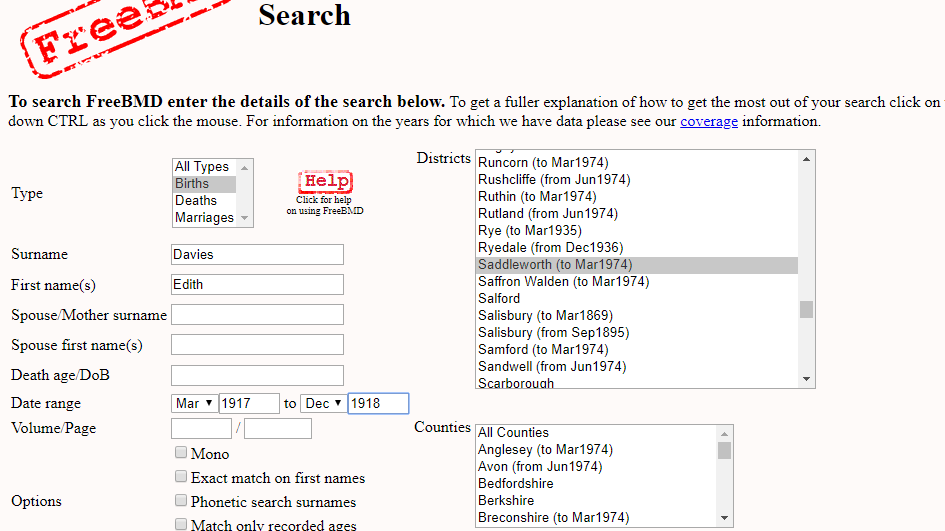 The search for Edith Davies resulted in one record. An Edith Davies born December 1918 registered in Saddleworth and the mother’s maiden name was Dunning. I went back to the search and re-entered Harold Davies with a mother’s surname of Dunning and found there was a birth of a Harold Davies born March 1913 registered in Northwich in the county of Cheshire. A further check revealed another child born March 1921 Norman Davies registered in Saddleworth. 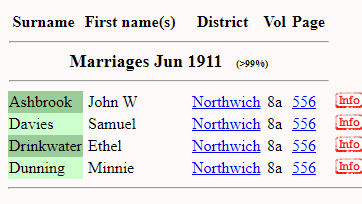 Samuel Davies and Minnie Dunning were married in Northwich, Cheshire. Their first child Harold was born in Northwich and then they must have moved to Saddleworth between 1913 and 1918.

My next place to research was www.findmypast.co.uk. You need to have an account to access their records (members of the Church of Jesus Christ of Latter-day Saints can get access for free). A search of the 1939 register would hopefully show Samuel and Minnie as they were still alive at this time and it should show them in Saddleworth. The 1939 Register is a useful resource for family, social and local historians providing birthdates and occupations. The register provides the most complete survey of the population of England and Wales between 1921 and 1951.As the 1931 census for England and Wales was destroyed by fire during the Second World War and no census was taken in 1941. 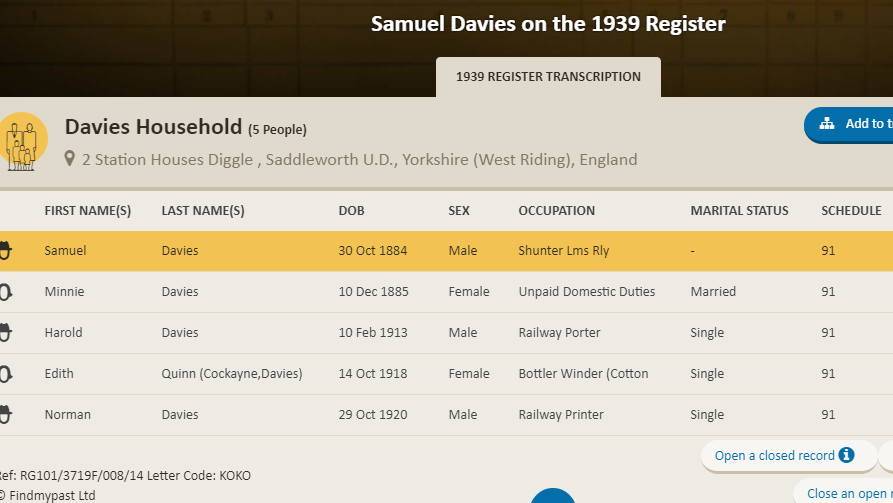 The search revealed that Samuel Davies was working for the Lancashire Railways and was living at 2 Station Houses in Diggle, Saddleworth. Working for the railways meant Samuel belonged to a Trade Union and there would be a record to find. Another quick search on findmypast revealed that he joined the trade union in 1913 in Greenfield, Saddleworth and it also showed his death date as 23 June 1965. This date matched the date taken from the gravestone. We had found the right Samuel Davies and Minnie Dunning! By using online sources and calculating approximate dates to find record collections, the jigsaw pieces to this family tree puzzle had been placed together.